One of my favourite wargames.

For those who don’t know Squad Leader,...

(Those who do know SL: scroll down)

Squad Leader is a great boardgame dating from 1977. It’s a game about infantry combat and stresses the importance of leaders, hence it’s name. Historically, leaders are the ones that take the decisions that shape the future, the ones who inspire the rest, the ones the others look up to. In combat, leaders are very influential. Quote from the book “Enemy at the Gates” by William Craig (which is a compilation of eye witness accounts, by the way, and not fictional, as the movie by that name is) :

"A battalion led by Captain Mues cleared the area south of town, reached the Volga, and turned north. It was Mues’ intention to shake hands in the centre of Rynok with German units cutting into it from other directions. Fog and light snow began to obscure vision but the aggressive Mues pushed on. Fearless, revered by his men as “immortal”, he was tracked by a Soviet sniper, who put a bullet in his brain. The attack stopped abruptly as Mues’s troops gathered around the stricken officer, now unconscious and near death. They ignored the bullets and cried over the man they loved.
An officer from another regiment finally came, lifted Mues in his arms and staggered away with the heavy burden. Soldiers who had fought with the captain through Russia broke down and collapsed. Others became fearful and timid as news of his death spread like a bushfire." 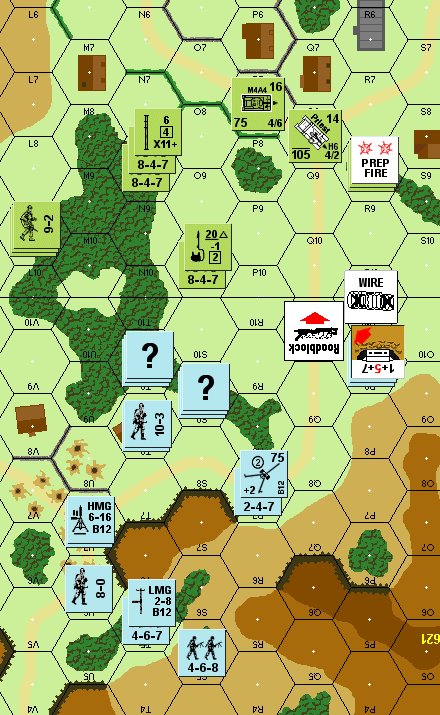 Squad Leader (SL or SQL for short) is a game in which one player plays the WW-II Germans and the other either the Russians or Americans.

As shown, the game uses counters for individual ‘squads’ (groups of 6-13 men), leaders, tanks, machineguns, and other weapons from that era. The game is played in ‘phases’: Preparation Fire Phase, Movement Phase, Close Combat Phase, etc.
The game is more of a ‘framework’, a ruleset with which many different encounters of WW-II can be ‘replayed’. Though it’s a game and not a simulation, it presents you some nail biting decisions, which gives you a feel of a battalion commander. “Flank or frontal?”, “Did my fire suppress the enemy enough to attack?”, “Will 1st platoon hold the left flank or run?” During one game which last a few hours, you (re)play only a few minutes of historical fiction.
The rules are a challenge, but due to a step-by-step learning process and still, after a few decades, good online support on many SL mailing lists by many SL fans, it’s something anyone with an interest in either war gaming or WW-II can do.

For those who do know Squad Leader,...

...what’s left to mention, what’s not on sites like Advancephase.com and Squad Leader Academy?

Which, by the way, are great Squad Leader sites.

I guess the first thing to mention is that currently there is still an active online community and tournament. It's a google site and can be found here: Squad Leader Tournament site

Well, speaking for myself, when I started using VSQL (which is the name for the free VASSAL module to play Squad Leader online or by e-mail. For more info, go to the VASSAL site), I didn't like my desktop shortcut, which looked like this:

So I started looking and working and now it looks like this:

Want it? Go to my next page and follow the instructions.

SL comes with a list of units and their comparable 'price'. This is added in the rules to enable developing your own scenarios. But hey, who's gonna pick up paper, pencil and calculator these days? So I threw all data in Excel and made a Squad Leader Army Builder. It's one printer page big and lets you design your own two armies. It even warns you if you use more units then the box provides. You can find the army builder here.

Did I forget something?

Alan Yngve once came up with, in my opinion, a very good idea.
Problem: in some (half-)bid tournament scenarios, one side would come up with a fighting group which would in nothing resemble anything which has ever set foot upon the battlefield. Strange unit combinations, maxed out playing units, etc.
Solution: to make a more historical Squad Leader, he made Squad Leader on the Western Front. The idea was, that in these scenario's, one side has a fixed force and defends a number of Victory Points. The other side can be played by choosing 1 to X units with which you will secure victory. Each chosen unit is paid for by 'spending' Victory Points. So a Rifle Company is worth 1 VP, a tank destroyer platoon is worth 3. The difference between the VPs spent and the VPs won determines how good your victory was. (You did win, didn't you?!?) This system could assure a more or less historical accurate fighting force and should be good for tournament play. (Who had a major victory?)
Regrettably, Alan never made it past the VP table, so although no scenarios for this system exist as of yet, all the tools to make them are ready to use. Alan focused his research on the Western Front, so it's Germans versus Americans.
The table to select VP units is available for download here. It's a PDF file.
I also made an army builder in Excel for this type of play too. That builder can be downloaded here.

Since I wanted to know what that small drawing on that counter was in real life, I looked most of the fighting vehicles of Squad Leader up. I placed the pictures on this page.

When I play scenarios like nr2, 'Tractor Works' and nr3 'Streets of Stalingrad' face to face I find myself fiddling with large stacks of leaders, squads and support weapons. The stacks don't move a lot, and when they do, something stay unchanged (move as 1 stack). But multiple times during one turn I forget what the bottom counter of the biggest stack is. OK. That's my memory. But to overcome this problem, I created the Detachment counters and the Detachments Overview Sheets.
I use them myself playing counter heavy scenarios and like the sheets. But I'm interested in other SL players findings: please mail me any experiences or post them in the guestbook.
It's a 3 pages PDF file (76 kb). On the first page some info and the new counters, on the 2nd and 3rd the overview sheets for both players. It's as simple as it can be and used in many other wargames. I suspect many players already use something like this - we used M&Ms before :)

I used the term (and graphical representation for) detachment because the 2nd definition according to NATO (JP 1-02) is "A temporary military [..] unit formed from other units or parts of units", which pretty much describes a stack in Squad Leader. The NATO symbol for a detachment is the same as for a platoon: 3 dots above the unit type symbol.

(xls = For this download you need a program on your PC capable of running Microsoft Excel 2000 files.)